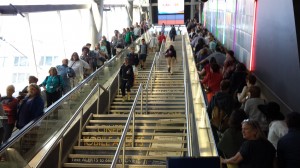 Another Toronto film festival (TIFF) has ended and once again I’m exhausted.  This year was additionally challenging as I was (and still am) fighting a cold from the beginning.  But it was still an enjoyable process and as usual I am coming out of it motivated and inspired as a visual storyteller and ready to jump back on board to complete my film.

Highlights from this year include:

Key Message: You are not a documentarian, you are a filmmaker.  Put the art before the politics.  People want to be entertained-they want popcorn not medicine.

Key Messsage: The audience for documentaries is there and hungry and willing to pay.  We need more ways to make docs easily accessible.

-catching up with my Program Coordinator from Humber, Donna

-meeting local and international filmmakers and talking about current projects

-Sunshine Superman-amazing 16mm footage from 2 decades of BASE jumping

(8 year project for the Director)

-Seymour: An Introduction-charming and modest subject who is a marvelous pianist

-Learning to Drive (allowed myself one American film this year)-refreshing to see a 50+ Actress lead a smart and funny film.

Bonus: Patricia Clarkson was on stage for Q&A!  (and she kept the film idea alive for 9 years)

-The Dark Horse-Great film from New Zealand about former Chess Champion who trains a bunch of at-risk youth (and thanks to Manifesto for discounted price!)  Worth the 8:30am bike ride and skipping a shower.