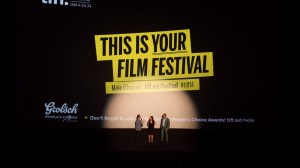 I just came back from my first TIFF screening of 2014.  This year I did a better mix of the different categories and am seeing a few documentaries.  I usually avoid docs at TIFF as I felt they didn’t really select pieces from emerging filmmakers.  Tonight’s film “Sunshine Superman” was the first feature by director Marah Strauch.  It told the story of energetic and obsessed Base jumper Carl Boenish (and I learned that BASE stands for Building, Antenna, Span, Earth) who went from electrical engineer to skydiver with 16mm film cameras strapped to his head.  Go Pro footage on YouTube now seems so wimpy in comparison!

During the Q&A Marah mentioned that the film took her 8 years to work on-the same magic number of years I am now in for my film.  Her subject Carl had over 20,000 feet of film from documenting his hobby-I can only imagine the grueling editing experience they went through!  This piece was fabulous to see on the big screen and really focused on the beauty and gracefulness of skydiving while traveling to Houston, Texas and Norway.  Almost convinced me to want to try it but I think I’m still too scared…..Glad I started the fest off with this fun film.