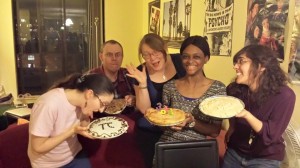 It came to my attention that Pi Day 2015 would be an epic one as it would be the only day for a century truly fulfilling the most digits of pi: 31415926 or March 14/15 @ 9:26 AM.  This was also the 10th Anniversary of my film easy as pi’s release and I was motivated to interview three people from the film to find out where they are now.  I also thought this would be the perfect time to release a digital download file and practice my online marketing skills.  All funds directly support the budget of my new film In The Spotlight.  I’m happy to report that in anticipation of Pi Day 2015, my trailer had 100+ views on YouTube and I had 18 views/downloads of the digital file.  Of course this was also a great excuse to host a pie making/eating and film viewing party with friends!

It’s hard to believe that 10 years have passed since releasing my first documentary easy as pi.  I can still remember how the journey began.  It was Winter 2003 and I was at a screening for Kill Bill with my older sister, a Computer Science student at the University of Waterloo at the time.  It was my second year at Humber’s Film & TV program and I knew that in third year I would be working on my independent production.  At some point she mentioned a time when a friend of hers frantically ran out of class one day to recite pi digits in a competition.  I learned that Math enthusiasts at Waterloo were very serious about celebrating Pi Day each year on March 14 @ 1:59pm.  It was the most weird and wonderful thing I had every heard and immediately became intrigued to learn as much about it as I could.  I remember stating: “I want to make a documentary about that!” and sure enough, I did.  More on my pi journey in the next post.