St. Michael’s Hospital started a blog for the Inner City Health program and I was commissioned to take photos of the Authors to have alongside their posts.  The ideas was to go to these Health Care professionals in their work environment and get a creative head shot.  I wanted to incorporate a textured background that was somewhat related to the work that they do.

For the first two Authors I photographed Jim O’Neil.  I was told he deals a lot with administration and didn’t want a shot of him at his desk surrounded by paperwork.  Instead I photographed him in front of the lively nurses station on his floor. 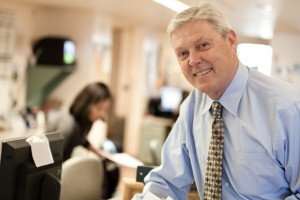 For Anthony Mohamed, he deals with the diverse population surrounding the Hospital neighbourhood so I decided to photograph him in front of a world map I found on the floor hallway.

For both shots I used available lighting and shot with a shallow depth of field to make them stand out.  I also slightly desaturated the photos to give them more of a raw look.