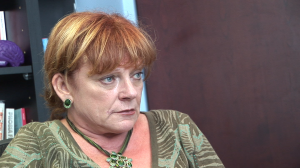 At the peak of Earla’s social phobia she was housebound for six years. Today she is challenged with unstable medication, financially supporting herself, and appearing in various media outlets as a mental health advocate. Can her passion to help others outweigh her fear of people?

One in ten Canadians suffer from an anxiety disorder, the third most common being Social Phobia (after depression and alcohol dependence).  The crippling illness of Social Phobia (also called Social Anxiety Disorder) is like a reverse ego: the belief that everything you say and do is monitored and judged by people around you.  Participating in “In the Spotlight” was an extension to Earla’s recovery.

Experience an in-depth access to a world little known and even less understood.  The film is currently playing on CBC’s Documentary Channel!  View the schedule here